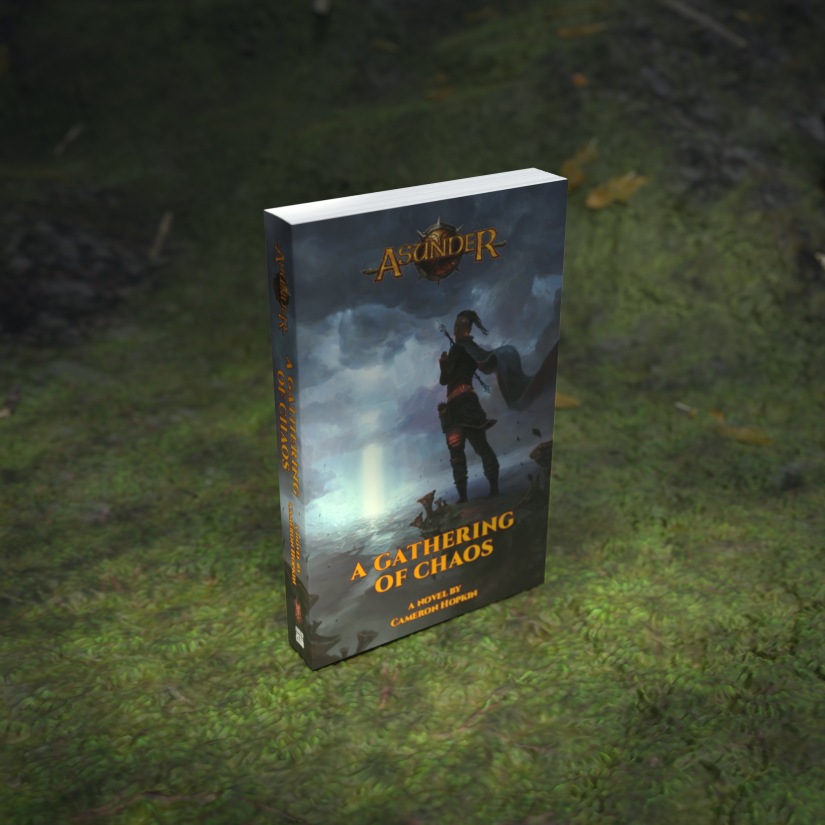 My first novel, The Gathering of Chaos, is complete and will be available soon on Amazon, other e-book retailers, and the Asunder storefront.

The Gathering of Chaos is a fantasy novel set in the world of Asunder, a place with no gods and no metal. Humanity is scattered across a wild mainland and a handful of  islands.

The people of each place have developed in harmony with what exists there: the people of New Gaia have learned to control and manipulate the overabundant plant life, the folk of Pacari bond with great beasts, the barbarians of Black Island have found mastery over the human body, and those of the mainland have discovered innovation, technology, commerce… and war. Enemies abound on Asunder, for humans are not the only thinking beings — the half-humanoid, half-snake Naga hunt humans for sport and food in the wilderness, and there are mutterings from the northern islands of demons.

When the gods have fled and the shackled earth rises up in their absence, imbalances are bound to occur. So discovers Gamarron, an aging warlord-turned-peacemaker, when his people’s endless fight against the demons of the north erupts with the arrival of a vicious demon lord. Gamarron’s people are slaughtered and he alone survives, fleeing as the burning specter howls at him to bring the Chaos Shard. Thinking to deny the demon lord its prize and turn this desired power against it, the old warrior monk sets out to discover the deep secrets of Chaos. Together with a rebellious Beast Rider, a naïve country girl touched by the Purelight, and a corrupt priestess of an earth cult, he searches through the shattered islands and trackless mainland of Asunder, his winding road bringing him ever closer to Chaos and ruin.

The world of Asunder is also the setting for a new tabletop RPG that ran a successful Kickstarter campaign at the end of 2020. The artwork you see on this page is a taste of what will be in the worldbook. A Gathering of Chaos will come packed-in for those who buy the core Asunder books and also available for purchase by itself.